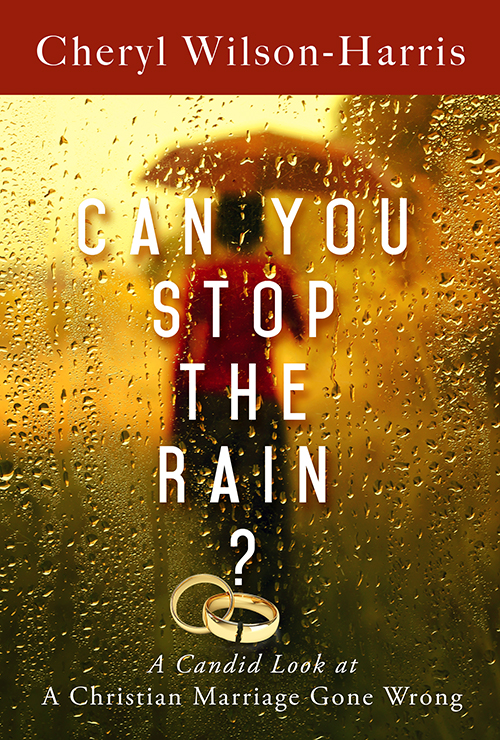 The Novel
This is the story of a Christian woman that met a man that did not yet have a relationship with God. He vowed to renounce his old lifestyle and commit to God so he could start a new life with her. But is he really the man he portrays himself to be?
Buy E-book copy from Amazon
Buy Paperback Copy from Amazon

“Can You Stop The Rain?”

If you’re a single Christian female you already know that meeting a God-fearing Christian man can sometimes be a challenge in this generation. According to Cathy Grossman of USA Today, women outnumber men in church attendance in every major Christian denomination and are 20% to 25% more likely to attend worship at least once a week as opposed to men.

The U.S Congregational life Survey done back in 2001 lends more credibility to this finding when their survey revealed that an average US church congregation is about 61% female and 39%, male. According to the 2014 Religious Landscape Study, almost half of American adults are married. So, between unsaved men that don’t have a relationship with God and Christian men that are already married, the pickings can seem slim.

You want to please God with your relationship choices, but with these types of odds, when a man does come along that you like, you may not be so quick to turn him away. The guy is attractive with a lot of confidence and swagger and you really like that. Things may start off great, but over time you start to see disturbing trends that you know could lead to trouble but you might choose to ignore it because you don’t want to be alone again. Yeah, I know exactly where you’re at.

In fact, this book tells the story of a Christian woman that meets a charming, witty, intriguing man. He seems perfect in every way except for one technicality. He’s not a Christian. He’s a real charmer and always knows what to say and do, so she allows herself to grow closer and closer to him even with the knowledge that he’s not a Christian. She had no intention of falling for him, but she was. She thought her problems were solved when he suddenly decides to embrace Christianity to try to fit into her world and give her a reason to let down her guard.

What he discovers is that the more he learns about God the more he realizes that seeking God just for her may not be enough. He begins to be enticed with seeking God for himself in hopes of putting his life on the right track. If the story had ended here, it would be a praise report, but it didn’t end like this. In fact, this was the beginning of a cautionary tale. When God tells us in his word not to be unequally yoked together with unbelievers we should take heed to that word for our own good. Everything that glitters is not gold.

This is my story. I’m the “Christian woman” in this book. Get ready for intrigue, suspense, and heartache riddled through each pulsating chapter as you laugh and cry your way to the explosive conclusion, but most of all I hope your ready to learn from my mistakes so you don’t have to make them.